(Part 5 of a 54 part series. Introduction and index located here) 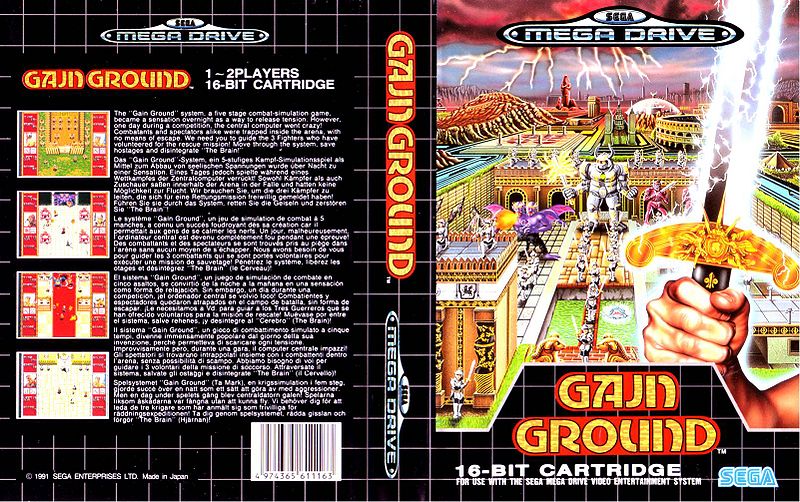 Game: Gain Ground
Release Year: 1991 (on Genesis, originally a 1988 arcade release)
Plot Summary: We’ve seen some nonsensical excuse plots before, but Gain Ground has by far the most baffling frame story of a game we’ve encountered so far. Essentially, in the universe of Gain Ground the video game, “Gain Ground” is the name of a combat simulation game, and people are trapped inside it. From the back of the box:

The “Gain Ground” system, a five stage combat-simulation game, became a sensation overnight as a way to release tension. However, one day during a competition, the central computer went crazy! Combatants and spectators alike were trapped inside the arena, with no means of escape. We need you to guide the 3 Fighters who have volunteered for the rescue mission! Move through the system, save hostages, and disintegrate “The Brain!”

Stop and admire the strange levels of meta-narrative here, where you the player play a game in which you’re playing a player in a game. It’s like a non self-aware The Stanley Parable. Some further points to ponder as you reflect how far game writing has progressed:

Gameplay Summary: While its plot is garbage, Gain Ground is actually a pretty mechanically interesting game. It’s a single screen shooter in a top-down perspective, basically an arena shooter with shmup and bullet-hell elements. You control a single soldier, and go around shooting bad guys while trying not to get shot yourself. Most enemies die in one hit, but later, they take multiple hits. So far, so boring. 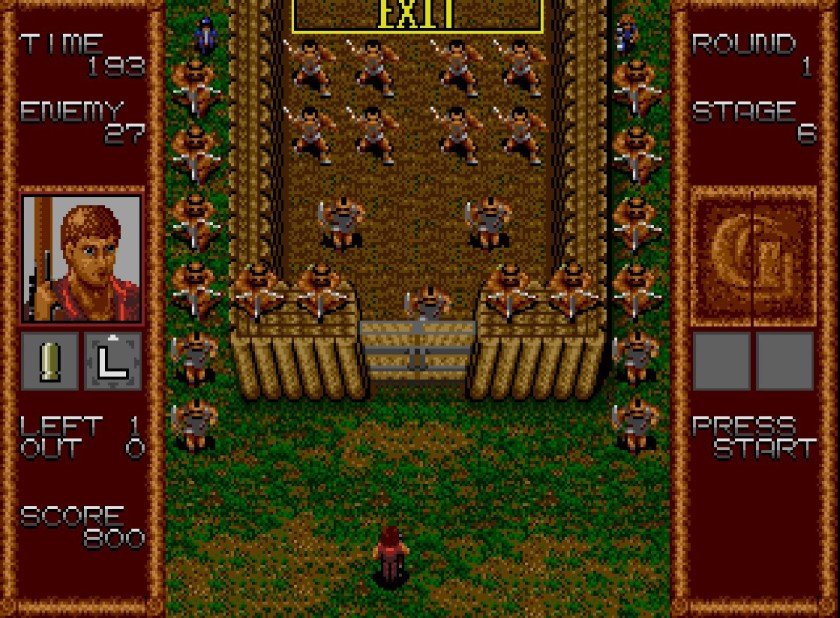 But Gain Ground plays with this formula in a few ways. First is the projectiles and level design. While there are the standard slowly flying bullets that hit anything, there’s also an array of parabolic projectiles like arrows and javelins, that can arc over opponents. These are also necessary to hit enemies at higher elevations.

The real treat though is the lives system. Rather than having abstract lives, you start with three actual soldiers, who have different weapons and playstyles. If one gets hit in a level, he becomes a little statue (for some reason), and you choose someone new to play as. If you tag your statue’d teammate and make it to the exit, you can thus “save” your teammate. It’s a wonderful mechanic as it gives meaning to every person you play as, and lets you recover from your mistakes.

As you progress, you come across other statues already present in level, and if you save them they get added to your pool of fighters. There are actually twenty in all, and so a full roster gives you a huge variety of people to choose from. There’s a great feedback loop going on here as well, because to finish a level you need to either kill every enemy, or get every character to the exit in the alotted time. So if you have a large number of teammates, the game actually becomes harder because you have more people to get to the exit.

On the other hand, having more people lets you tackle every stage in a different way, because every character has different strengthes. Their attacks have different ranges and height profiles, and they can fire in different directions. They all have different properties as well, like splash damage, or enemy-seeking bullets, or magical fire, or a boomerang, or firing five missiles at the same time… yeah, they’re at some radically different power levels.

Play Summary: Even though its nominal plot is ridiculous, Gain Ground actually does a good job of allowing the player to produce their own narratives. Because of the constantly changing roster of soldiers, each with their own abilities, and the mechanic of rescuing them when you make a mistake, the course of each level feels unique since your approach can differ. Sometimes you have daring last second rescues, sometimes you get the whole team wiped by a demon statue and reload since you’re using save states. That’s no mean feat for an arcade shooter. It’s unfortunate its narrative framing is so phoned in actually, with just a little more tightening up, Gain Ground could’ve been a really singular experience.

Observations and Takeaways: I confess I don’t really like the core mechanic, the run and gun shooting mechanic, in part because the game betrays its arcade origins by being really hard. But the fabric of its implementation make it feel really fresh, and by constraining each character (limiting their shooting axis, etc) it lets the player make interesting choices in their deployment. The feedback mechanism of the growing roster is particularly good too, the combining of positive and negative feedback loops makes it self-regulating in terms of difficulty but still allows for meaningful progress. Gain Ground isn’t really a good game, but it’s novel mechanics are definitely worth a look over.

Next Time: The next up in the collection is the legendary beat ’em up Golden Axe, a very influential brawler with a high fantasy theme.

This site uses Akismet to reduce spam. Learn how your comment data is processed.